This disk comes from Minoan Crete, the ancient civilization famous for the Maze of Daedalus and for naming our constellations. The disk is only 6-1/4" in diameter and 1" thick. Mathematics is apparent on the disk, and we can discover Mediterranean Bronze Age concepts of mathematical symmetry on this disk just by counting the pictographs, the spirals, and the line segments.

The artifact is terracotta pottery, about 6-1/4" diameter, only a litte larger than a CD, with 2 inscribed sides and 2 spirals per side, each spiral with 5 rings (10). The spirals are divided into 60 line segments (30 Side 1, 30 Side 2). The outside spirals have 12 line segments (24 outside); inside spirals have 18 (36 inside). Divided among the line segments and pressed into the the disk are 48 unique miniature pictographs, most of them replicated to create 240 pictographs. 37 are created to appear identical and are repeated various times. 11 are unrepeated.

The disk was found in 1908 at Phaistos, Crete , beneath the palace in a basement corner accessible by a trap door above, where the palace had been burned to the ground by an intense fire. This could explain how the disk came to be fired in a civilization of sun-baked pottery. Beside the disk was a tablet of Linear A (undeciphered) writing of ancient Crete, perhaps explaining it.

The disk delivers complex information in a simple and playful way. Based on the Minoan love of mazes and the ancient method of forming constellations by connecting stars with lines, the disk conceals the constellation Argo and other related images that are revealed when matching pictographs are connected by lines.

Taking a clue from this pictograph (left, man holding a shield with tiny circles in the shape of a hexagram), the connect-the-dots approach of viewing the disk reveals in total eight significant and complex images, as well as numerous simple geometries, that are concealed on the disk.

In ancient Egypt the god Khnum, one of the earliest gods, made the Ba or human bodies of children from clay on his potter's wheel. He also placed them in their mother' womb. This accounted for the origin of the human body of an individual, which came from out of this god.

He was the consort of Heket, who breathed life into the children at birth. He was also thought of as the creator of other gods, so he became identified as the Ba of Ra, the human counterpart of the higher divine self or Ka. Ba was also the word for Ram (above, left, Phaistos Disk pictograph). The creator of the Phaistos Disk was perhaps embodying the spirit of Khnum-Ra when at the potter's wheel creating the disk.

The idea of God the Geometer (above right, 1220 ce, Bible Moralise of Blanche of Castile) is attributed to a much later age than Minoan Crete. But perhaps Crete was instrumental in making humanity's religious transition from the idea of God as Potter to God as Geometer. For thousands of years the Egyptians envisioned the idea of God as Potter in their worship of the god Khnum, who created all of humanity on his potter's wheel. (above left) In this respect the Phaistos Disk creater is embodying the god Khnum in the creation of the Phaistos Disk on a potter's wheel and indicating that not only humanity but the Universe is created on the potter's wheel and thus is explained the circumlocution of the stars.

As you have observed, the pictographs on the disk are so tiny they appear to be identical. Therefore, for about 100 years an assumption was made and widely accepted by all who study the disk that the pictographs were made with tiny stamps pressed into the clay disk. The solution to this mystery was assumed to be an early printing press technology in the form of tiny pre-made stamps.

That was another theory that became widespread when somebody looked at the disk and started guessing without analysis involved, so the theory is incorrect. All that's required is to enlarge the disk (admittedly, a scanner, printer and copier are nearly essential for this approach, and I was fortuitively living in the age of printer/copier/scanner, but a picture of the disk and a magnifying glass would also have worked), crop the pictographs, place them side-by-side and compare (below).

The printing press theory of using tiny stamps to the create the disk is incorrect. The pictographs above, cropped from an enlarged bmp image of the disk, show the pictographs were intended by its creator to be identical but are not absolutely identical because the disk creator lacked the rudimentary printing press technology that has long been ascribed to the creation of the Phaistos Disk. Also notable is the amazing illusion created by photography that the pictographs are raised above the clay, thus probably accounting for the "printing press" theory. They are, in fact, etched into the clay, and this seems impossible, too, when you consider how fast the artist would have had to work to get 240 of them in exact placement before the clay dried.

As the disk is only a little larger than a CD, the pictographs on the disk are tiny. When these two pictographs are reduced to a size that might appear on the disk, they do become "identical." But when they are enlarged they are obviously the same but not identical.

I cropped all the pictographs on the disk and displayed them so you can see that not a single one of them is identical to another. Obviously, a very good artist created these pictographs and this disk. Only a great artist working in the genre of miniature art could create 240 individual pictographs to appear to be identical. It is very likely the artist excelled in the genre of miniature art during the Minoan period where art miniaturization which was so very popular.

If the disk was intended to contain a language script, why not etch that script into the disk rather than picture writing? If the artist had the idea and the knowledge to create unique stamps, then obviously s/he would have done so, if for no other reason than to make the pictographs truly identical and also to save a monumental amount of time. Therefore, printing press technology in the form of tiny stamps into clay was not known at this time or, if it was known, this particular artist did not know it. There is also the possibility that the stamp technology was known but did not work well impressed into clay.

HOW WAS IT MADE?

These images are cropped from the disk. Each set of images are the same in that the artist(s) intended them to appear to be identical, but they are not identical. They were not made with tiny stamps as is widely accepted but were individually etched into the clay by an artist so accomplished at miniature art that we believed them to be exactly identical as though made by a printing press technology. The artist needed them to seem identical so the connect-the-dots method of solving the disk puzzle could be accomplished.

So how was it made? Here is my theory. The artist of the Phaistos Disk made at least 10 to 20 sketches of the disk designs prior to creating it. Perhaps the sketches were made using papyrus or perhaps they were simply drawn into sand. Maybe they were created as other Phaistos Disks but did not come out right so were destroyed and the attempts continued until this disk was finally created satisfactorily to the artist.

Alternately, the artist may have created a way to elevate the disk while working on it. Depending on the wetness of the clay disk, the artist had a time frame to create it of probably two to 8 hours.

A close inspection of the disk shows smudging, particularly around the outer edges, indicating the disk may have taken some damage during this process or either the method of holding the disk upright left smudges along the edges. This method of making the Phaistos Disk seems very likely even though it also seems very incredible.

The Phaistos Disk is a pottery art masterpiece and is, at the very least, an artist's triumph in the genre of miniaturization. The disk itself may have been intended to be a miniature Figure 8 Shield . The Phaistos Disk may have been intended as a shield design to create a shield. (below, pictograph of the warrior holding the disk/shield) Each side of the disk is a face of the shield, upper and lower, and on both faces are more designs so that the Figure 8 Shield itself is a world disk in miniature. 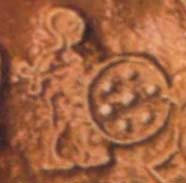 Can you read the Phaistos Disk picture writing?

In the ancient and widespread Egyptian mythology that was surely known to the Minoans, Typhon tricked Osiris into getting into

a beautiful coffin chest which he them dumped into

Isis, nursing the baby Dictys with her finger and beating her breast in mourning, went in search of Osiris in her

skiff. I She found him and buried him but Typhon, out hunting

with his dogs, found Osiris and chopped him up with his

the crabs and the

"sharp-snout" fish except for his

phallus, which must have gotten chewed up just a bit ;) 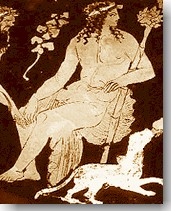 Phaistos Disk pictograph, the thyrsoi, the long wand topped by a pine cone, was carried in the festivals of Dionysis (above), who was considered a diety of corn.

He is supposed to have been the first to yoke oxen to the plough.

He was pictured in the company of dogs. He encouraged the love of writing and art.

Every two years the Cretans celebrated the birth and death of Dionysis. They built a casket that was supposed to contain his heart. They carried it around in front of them during their celebrations.

They summoned him from the marshes with sea-shell trumpets

calling for the god with the bull's foot to come to them.

Disk pictograph, an equilateral triangle with 20 dots inside, could symbolize the icosahedron, composed of 20 equilateral triangles and later to become known as one of the five Platonic solids. Or perhaps it represents the Minoans who toured inside the Great Pyramid. 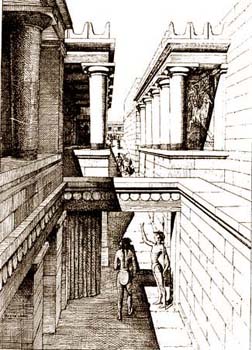 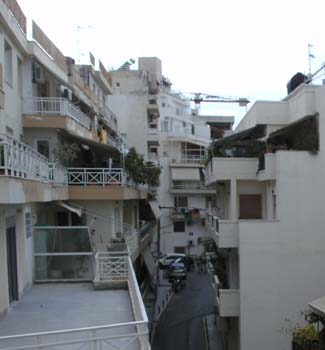 Architecture hasn't changed that much in 4,000 years. Inside Knossos Palace, Crete, buildings trimmed in disks and stylized bull's horns and the view from my window in downtown Heraklion, Crete

...a palace only less extensive than that of the Cnossus kings. Phaestus becomes a Cretan Piraeus, in love with commerce rather than with art. And yet the palace of its prince is a majestic edifice, reached by a flight of steps forty-five feet wide; its halls and courts compare with those at Cnossus; its central court is a paved quadrangle of ten thousand square feet; its megaron, or reception room, is three thousand square feet in area, larger even than the great Hall of the Double Ax in the northern capital. ( The Life of Greece , Will Durant)

At Phaestus, about 2000, he builds ten tiers of stone seats, running some eighty feet along a wall overlooking a flagged court. (Durant) 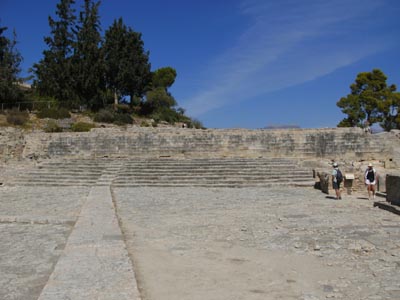 In Middle Minoan I the earliest palaces occur: the princes of Cnossus, Phaestus, and Mallia build for themselves luxurious dwellings with countless rooms, spacious storehouses, specialized workshops, altars and temples, and great drainage conduits that startle the arrogant Occidental eye. (Durant)

I think we should disengage from the hook that has created so far assumptions that this civilization built drawing information and knowledge from the Babylonians and Egyptians...It is not logical that a civilization that had developed maritime trade from 2800 BC to 1200 BC not have developed appropriate science, and its needs should have developed, among other things, mathematics and astronomy. (Dr. Minas Tsikritsis)

Minoan Symbols for Star and Constellation

Page 14 - Origins of the Phaistos Disk | How Was it Made?